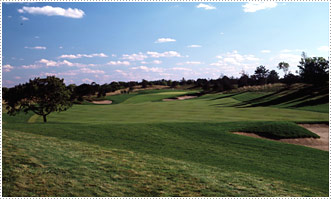 The opening hole is one of the longest on the course but can be reached in two by the longer hitters. The most advantageous play is to hit your tee shot over the left fairway bunker, which will leave you with a choice to lay up or go for the green. Those going for the green will need to hit a fairway wood or long iron. If you lay up you want to leave yourself about 85 yards to the green and avoid the right fairway bunker at 130 yards, this will provide you with the most level lie. You will only be able to see the top half of the flagstick, as the shot is severely uphill. 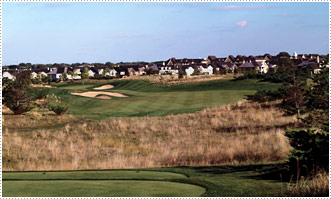 The second hole is a slight dogleg to the left and depending on the wind most players will hit a fairway wood or long iron off the tee to give themselves a full shot into the green. If the hole is playing downwind players may elect to hit a driver over the left fairway bunker and try to get within a few yards of the green for what should be an easy up and down. The second shot will be a short iron and players need to be sure to avoid the right greenside bunker as the green slopes severely from right to left. 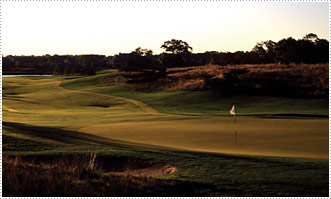 The tee shot on the third hole is critical to making a good score. The water off the tee is not in play, but the players need to contend with the left fairway bunkers as well as the long rough and bushes to the right. This hole plays slightly uphill and is typically into the wind, which will make it play even longer. The players that find the fairway will be left with a mid to long iron into the green. Any misses should be to the right as a large bunker guards the left hand side of the green. Par is an excellent score here. 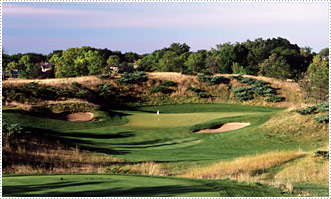 The fourth hole is a short but deceiving par 3. The tee shot is downhill to a green surrounded by high native grasses. Depending on the wind, players will be hitting anywhere from a short to mid iron to this undulating green. If the wind is blowing, par is a good score. 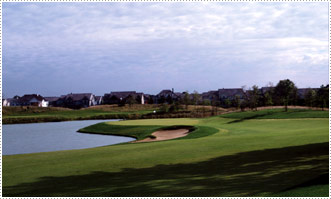 The fifth hole can be reached in two by the longer hitters even though the yardage makes it seem impractical. The hole typically plays downwind and the tee shot is slightly downhill. Tee shots should favor the left side of the fairway, which will leave the players with the best angle and shortest yardage to the green. If they choose to go for the green in two, it will be with a long iron or fairway wood and must carry the lake guarding the front and left side of the green. Players laying up will play out to the right into a generous landing area and leave themselves with typically 100 yards to the green. The fifth is another good opportunity to make birdie. 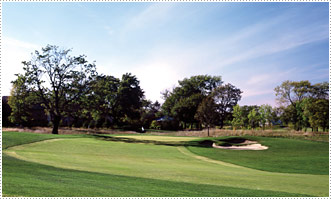 The sixth hole is the first of a stretch of three long and difficult holes. Into the prevailing wind, players will need to shape their tee shot from left to right and avoid both the left and right fairway bunkers that are in the landing zone. Fescue and out of bounds await players that miss left, and long rough, trees and bushes await a tee shot too far to the right. Tee shots that find the fairway are left with a mid iron approach into one of the smallest greens on the course, guarded by a catalpa tree on the left and bunkers on the right. Par is an excellent score on this hole. 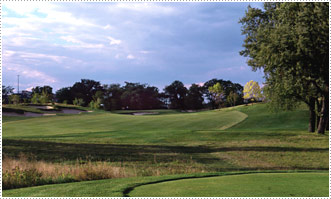 The seventh is another long par 4 in this stretch, but has a much more generous landing area for the tee shots. Players will be left with a mid to short iron approach shot to one of the largest greens on the course. It is imperative that shots are hit to the correct area of the green or else there is a risk of three putting. 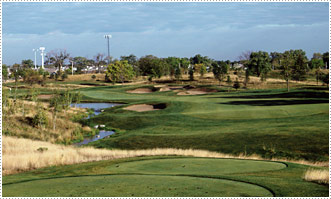 The eighth hole tee shot is one of the most dramatic and demanding on the course. A creek and lake run up the entire left side of the hole. Depending on the wind, players will hit fairway woods or long irons that must be placed accurately in the landing area. Water and a bunker await them on the left and trees and fescue on the right. The approach shot will be from 110-150 yards out with a short iron to a bowl shaped green. A good tee shot will be the difference between birdie and bogey. 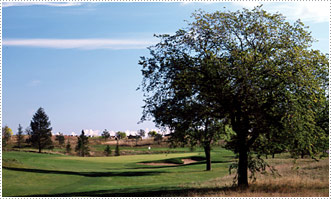 Although the yardage may suggest this hole to be very difficult, it is predominately downwind and the green is one of the largest on the course. Players will hit mid irons and need to be very accurate if they want to make a birdie. Par is a good score on this hole. 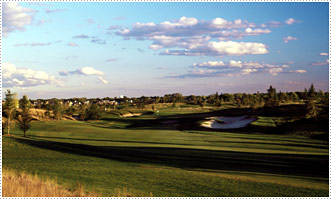 The tenth hole is short and should see plenty of birdies, as players will be teeing off with long irons and left with wedges into the green. Players must avoid the right fairway bunker on the tee shot and the longest hitters may try to go for the green with a driver. 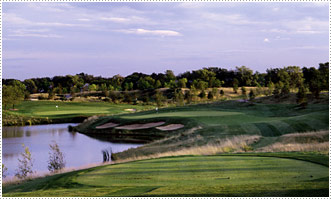 The eleventh hole is probably the most difficult par 3 on the course. It will play into the prevailing wind and the only bailout area is to the right, but an up and down from there is no guarantee. Players will be hitting long irons and must contend with a lake and deep bunkers that border the entire left side. If players find the green, they are still not going to walk away with an easy par as the green is tiered from right to left and it is important to be on the correct tier to make a run at birdie or have a good chance at par. A 3 on this hole is an excellent score. 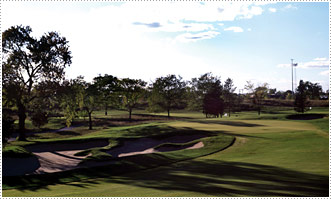 The twelfth hole is a slight dogleg left and players will want to avoid the right fairway bunkers. Players will tee off with drivers or fairway woods and are looking to land the ball on the downslope in the fairway just past the bunkers; this will leave them with a short iron or wedge into a large and relatively flat green. If the hole is up front, the players will need to make sure they don't end up short in the front bunkers. 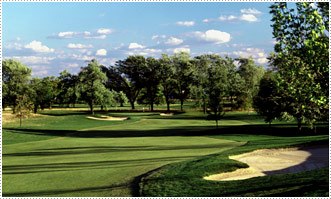 Players will most likely take a line over the left fairway bunker to catch the downslope and gain some extra yards. With a good tee shot, players will then be left with a mid to long iron into a wide but shallow green. The only trouble around the green is a bunker, guarding the front right, otherwise getting it up and down will not be too difficult. 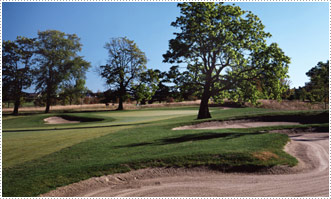 The last of the short par 4's on the back nine. Some players will elect to tee off with a long iron and place their tee shot between the fairway bunkers, but the long hitters may elect to hit driver if it is downwind. Tee shots must avoid the fairway bunkers and the large tree just past the bunkers on the right. The approach shots will be with short irons or wedges into the green. 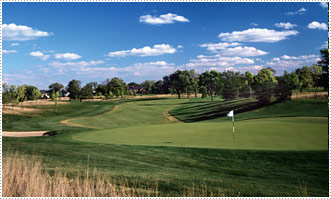 The wind will be a large factor in where players will elect to hit their tee shot. If the hole is playing into the wind, tee shots will be played at the turn in the fairway just left of the fairway bunker. If there isn't any wind or playing downwind, players will try to take the tee shot over the tree and fairway bunker to cut off some extra yardage. Approach shots will vary from a mid to short iron to an elevated green guarded by a series of bunkers on the right. Any shots missing short of the green will roll back into a collection area-making par a difficult score. The green is also two-tiered from front to back requiring those looking to make a birdie to be very accurate with their approach shot. 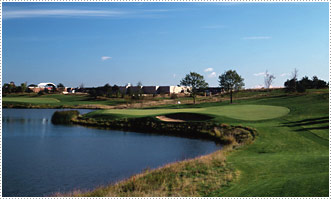 The seventeenth hole is a sister par 3 to the eleventh hole as water guards the entire left side and the bailout is to the right. This hole plays downhill and predominately downwind so players will most likely be hitting middle irons. The green is large and very undulating with three distinct areas, lower left, upper right and back. Players looking to make birdie must be on the correct tier and those finding the wrong tier must be deft with the putter to make par. Missing the green to the right will force the players to be very creative to get up and down. 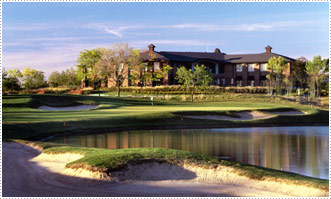 The eighteenth is a long par 5 that can be reached in two by the long hitters. The tee shot is elevated to a wide fairway and players will be looking to catch the downslope just past the right fairway bunker. Those laying up will need to contend with a fairway bunker and pond on the right and a fairway that gets narrower the closer you get to the hole. Players will lay up to a yardage that is comfortable to them and be left with a short iron or wedge into a green guarded on the front and right by a pond and bunkers and on the left by another bunker. Players going for the green in two will be hitting a long iron or fairway wood over a pond and bunkers to a shallow green - this is a very risky shot but can also be very rewarding with a birdie or possibly an eagle.